Apologies in advance for a huge wall of text, I know it’s been a while since my last post so I have a lot of updates to talk about all at once.

I’ve been doing a lot of thinking and conceptualizing these past few weeks, as I have been working on a large-scale project in another class that has given me new inspiration for this class moving forward. It involved a series of cohesive images, as we were designing a cult and propaganda to go along with it, and I’m including a screenshot of some of the work because I feel that it will help inform the direction I’d like to head closer to as the semester/year goes on, as well as show an example of what was essentially building a brand of sorts and corresponding imagery on a small scale, much as I would like to do in seminar on a larger scale. As I was working on that project, it got me thinking about thesis and how I feel like my current work doesn’t really reflect what I do well and most enjoy in the same way that my work in other classes has thus far. So while I am not abandoning the track I was on, I would like to refine/improve on the ideas to better reflect the type of work I’m passionate about making. So this is the brochure from my cult project below, which goes along with the poster that I will be bringing to class as an example of where I plan to go in actively incorporating screen-printing into my work in the near future. 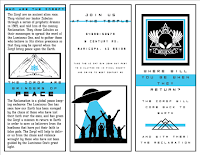 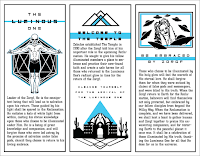 After the last time we talked about my work, I’ve been thinking about how to reach out and engage people about the topic of alienation. I have a few questions that could spark conversation that I will list below, but I am still unsure as to where or how I am going to get these questions out to people – whether it be in one on one sessions or via some kind of anonymous online survey, such as on Google forms. If anyone has suggestions, I’d be happy to hear them.

Some of the questions I have been considering: (most are generalized right now, though some are targeted toward a more LGBT specific line of questioning, since I’m undecided as to whether I want a narrow or broad focus for my interviews/data)

I am also still figuring out what I’d like to do with these stories/excerpts from people, whether I’d like to collect them and use them as text in a book or poster type scenario, or possibly overlay them on top of imagery relating to the ideas of alienation/isolation, or even abstract them in some way within/alongside an image. I think it will be easier to figure out once I have actual text in front of me and have a better idea what kind of language I will be working with.

I think the next step for me will be both finding the best way to reach out, which I am currently leaning toward a Google form type survey, at least to start, since they’re easy to make and easy to keep the responses anonymous while also having all the data collected in one place. Then, it will be on finding a way to better integrate my screen-printing work into the process, rather than going for overly detailed illustration type work, or working purely digitally as I have been lately. I’d still like to do work with characters/illustrative elements, but I also need to simplify them so they will translate better into the screen printing process, especially if I end up pursuing textiles such as shirts, since they tend to diminish the clarity of small details.

Lastly, I have an old design that I have resisted and a couple quick mock-ups using some left-over vectors in variant colors/fonts, simply to play with possible ideas for either posters or something similar - figured I would put them up to see if anyone has suggestions on how to integrate imagery such as this with the illustrative work I was doing previously. What are some possible solutions for integrating the two ideas in a way that makes sense/best represents alienation as a brand? This is another question I will be focusing on as I move forward, so that I can bring the various elements I’ve worked on so far together in a cohesive manner.